US President Donald Trump has fought to recover from sinking election polls by campaigning with a hardline pitch to America’s right-wing, claiming at rallies in Florida and Georgia that his Democratic opponent Joe Biden would deliver communism and a “flood” of criminal immigrants.

While Mr Trump put on a brave face, the fact that he was fighting at all for the two southern states he won four years ago illustrated how much ground he has to make up against Mr Biden in the 18 days left until the election.

With his polls sliding and US COVID-19 infections spiking, Mr Trump is focusing entirely on his core Republican base, in hopes that highly energized supporters will turn out in huge numbers. 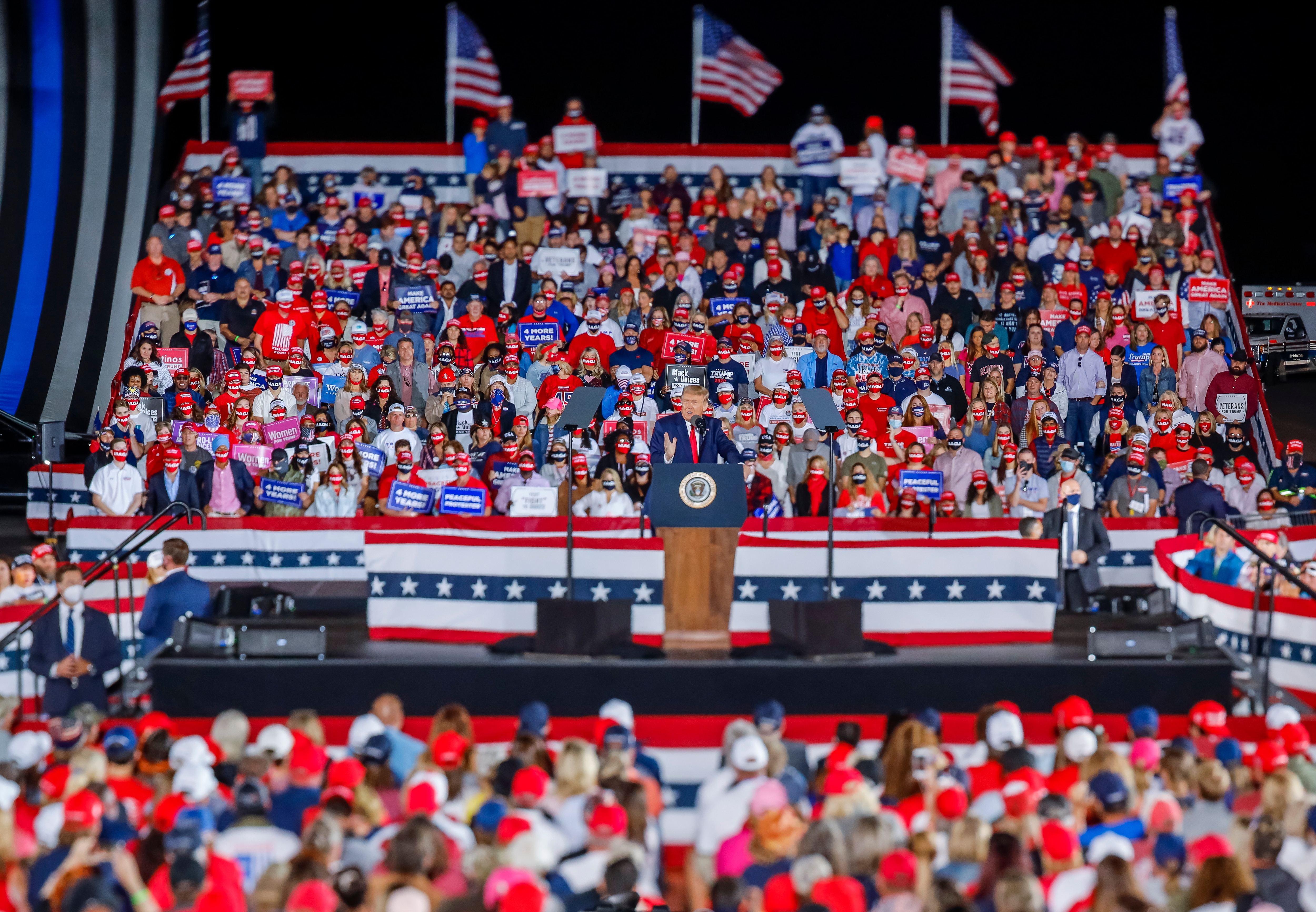 In Ocala, Florida, the coronavirus was an afterthought.

Instead, Mr Trump tossed the large, loudly cheering crowd red meat on immigration, race, and his conspiracy theory that Mr Biden is steeped in corruption.

Spicing his stump speech with lurid exaggerations, the President claimed that the “Biden family is a criminal enterprise.”

He said Democrats “have nothing but disdain for your values” and “want to turn America into a communist country” – a reprise of his successful 2016 message tapping into white, working-class resentment.

“It’s time we sent a message to these wealthy liberal hypocrites,” he told the cheering crowd in Macon, Georgia on Friday night. 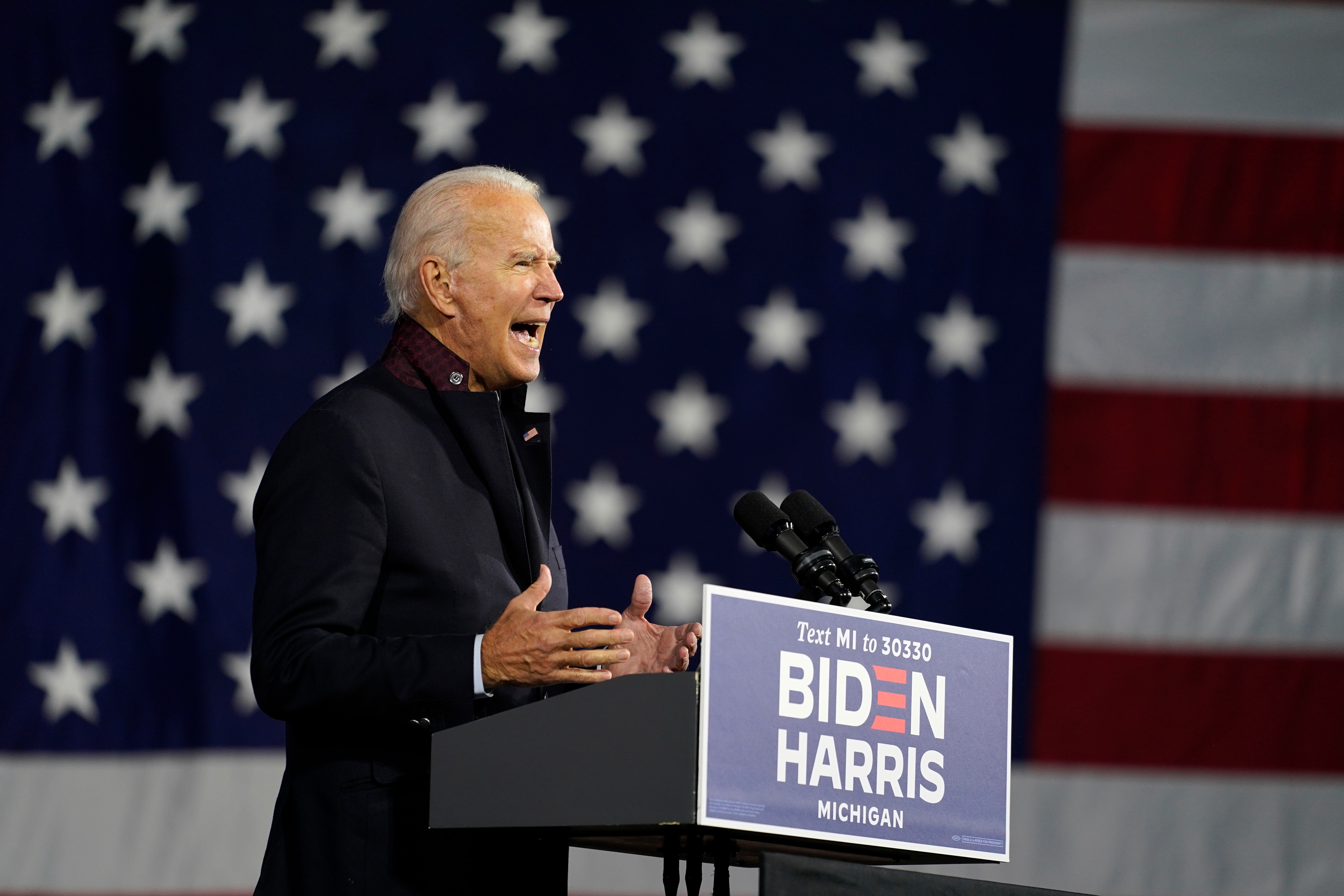 And he lashed out at one of his most outspoken critics, the Somali-American Democratic congresswoman Ilhan Omar, saying “she hates our country” and “comes from a place that doesn’t even have a government.”

Mr Trump had still more venom for journalists, whom he called “the enemy of the people.”

Mr Biden, meanwhile, was campaigning in Michigan where he ripped into Mr Trump’s handling of the coronavirus – the strongest issue of his campaign.

“He keeps telling us that this virus is going to disappear like a miracle,” Mr Biden said in Southfield.

“My lord! It’s not disappearing, in fact it’s on the rise again, it’s getting worse, as predicted,” Biden said.

He also homed in on another area where Mr Trump has run into regular controversy – his often lacklustre responses when asked to condemn extreme right-wing groups and white supremacists.

He said Mr Trump’s comments were a “dog whistle” to such groups. “Look, everybody knows who Donald Trump is, let’s show them who we are,” Mr Biden said at a car rally in Detroit.

“We choose hope over fair, unity over division, science over fiction and yes, truth over lies.”

“We are not ahead by double digits,” she said. “Those are inflated national public polling numbers.”

Mr Biden will be getting help from Democratic superstar Barack Obama on Wednesday when the former president campaigns in Philadelphia, Pennsylvania.

As the polling clouds darken for Mr Trump, prominent members of his own Republican party – including Senator Ben Sasse of Nebraska and Senator Ted Cruz of Texas – are sounding the alarm.

Senator Sasse, in a telephone call with constituents this week obtained by The Washington Examiner, said a defeat for Mr Trump looks “likely” and Republicans may also lose the Senate.

He also had harsh words for Mr Trump, saying he is “TV-obsessed,” “narcissistic” and allowed his family to treat “the presidency like a business opportunity.”

But Senator Lindsey Graham, a key Republican ally for Mr Trump, said voters were starting to weigh the pros and cons of the two parties, rather than focusing on Mr Trump’s bruising personality.

“I think it’s getting better for us by the day,” he said.

Mr Trump and Mr Biden are to hold a final debate next Thursday.

They had been scheduled to hold one this Thursday but Mr Trump backed out after it was changed to a virtual debate following his COVID-19 diagnosis. The candidates held rival town hall events instead.

Mr Trump, a former reality television star, won’t be happy about the ratings: 14.1 million tuned in to Mr Biden’s event, while 13.5 million watched the President, according to Nielsen ratings data.